This new head office in Italy was built in only six months, and it really is a model of energy-efficiency, constructed according to the Passivhaus requirements and with certifications of  Cened A+, CasaClima Class A, Work&Life and Minergie Protocol.

Among the four projects that participated in the tender of the Hoval company, the idea of a simple and minimalist structure made of steel and wood was the winner. Casa Hoval is a compact building with the functional separation of warehouses from offices; with wide windows, light rooms and bright colours that are present alternately - grey and red. The core of this building – the green garden located inside, reminds us of the ecological mission of Hoval. The internal garden is constructed according to specified requirements to create an optimal, internal microclimate with the use of the especially effective solutions of the Hoval company. After entering this new head office, we feel "at home".

Compared to traditional design work, which begins with the architecture of the building, and then later deals with the analysis of installations, the synergy has been used at the beginning in this case. For example, the choice and analysis of space and orientation were functional details adapted to the requirements of energy efficiency and internal well-being of the microclimate of Casa Hoval. 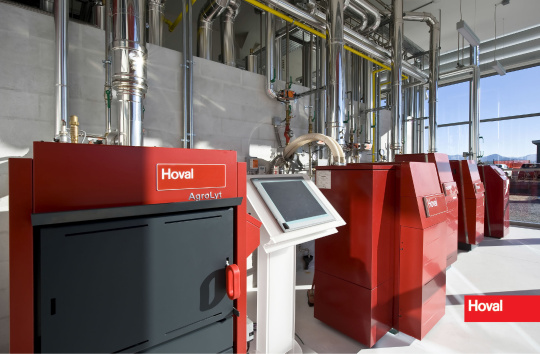 Before drawing up the design of installations, we tried to put the building together in such a way to be able to optimise the ratio between temperature and humidity, both in winter and summer, to prevent eventual problems that might have been caused by low temperatures in winter and overheating in summer. Because of this, the Casa Hoval project doesn't involve many windows that face south, and the building has been intentionally put in the direction of north, east, and partially west, which provides less sun exposure in summer. If we had not done this, an essential need for air conditioning and humidity prevention might have occurred, and it could have burdened the installations system. As the architectural design included the energy balance, Casa Hoval was constructed to produce only the necessary energy, and not to cover the gaps of an improper architectural design.

Casa Hoval also stands out because of two special highlights: Thermal station "on the window", where all the devices of the Hoval company are displayed, and futuristic climatic hall for training courses. The driving force of the Hoval object is a thermal station, in which all the Hoval systems are displayed, and are perfectly visible from the outside. They are also used to heat the building, simultaneously becoming the component of our training cycle, which Hoval offers to all the professionals in the business. It is a functional detail that refers to the core business of this company and to the technological passion of the Hoval company.

To heat and cool Casa Hoval, effective technological solutions were used: a ceiling illuminator powered directly from the thermal station. To provide the air circulation, we installed six units of mechanical controlled ventilation - Hoval HomeVent Comfort FR-500 with the air treating unit. The installation of the Hoval ultraSol collectors was used to produce hot water. On the roof of Casa Hoval, a photovoltaic installation partially covers the energy production. In the warehouse, six DHV devices for industrial ventilation have been installed. 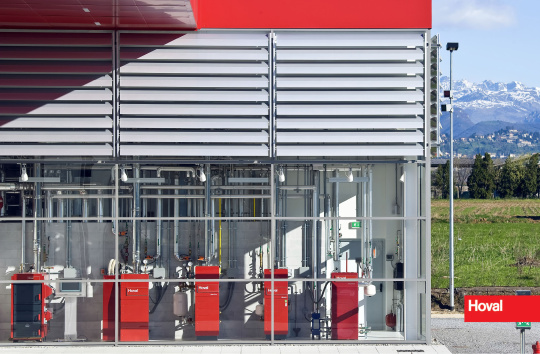 So this thermal station is also a place of heat installation, an exhibition hall, and a didactic-educational place that teaches the management of the Hoval devices. The idea of the thermal station was created out of the need to "touch" the Hoval company solutions and provides some kind of cycle that can be experienced. All the devices are connected in the distribution network. The Hoval Biolyt boiler, powered by pellets, is used for heating and is connected to the Hoval UltraGas® condensing boiler. Other solutions of the Hoval company that have various power supply technologies may of course also be activated for didactic purposes. Here is the shortened variety of the Hoval solutions displayed on the thermal station:

Such type of thermal station really has nothing standardised in it. It was crucial to develop the integrity between the high-energy-efficient systems, which would be able to cooperate and communicate with each other. From their side, the Hoval company has accepted an ambitious and enthusing challenge and used their best know-how. This company may also specifically present the additional values of their solutions: quality, technical performance and simplicity of use and maintenance.

If this case study and NZEB buildings caught your eye, pls share!

Cookies help us deliver our services. By using our services, you agree to our use of cookies. END_OF_DOCUMENT_TOKEN_TO_BE_REPLACED