Combined energy management based on cogeneration is a modern solution which allows simultaneous production of electricity and heat. Thanks to cogeneration units, not only can we lower the costs associated with heating a building and producing electricity, but we can also generate it in a way that is efficient and environmentally friendly.

Rising energy prices means that companies have to be much more aware of their cost structure. Changes in the approach to energy use at companies are also influenced by an increasingly conscious attitude of the society, which notices the need to protect the natural environment. The striving for savings and continual improvement of energy efficiency is growing alongside the popularity of alternative sources of energy, such as the sun, wind, water and biomass, as well as more economical handling of fossil fuels. In this light, obtainment of energy from cogeneration units is rapidly growing in importance and is bringing both economic and environmental benefits.

Combined energy management based on cogeneration consists of the generation of electricity and heat in just one device. Their simultaneous production takes place in the Combined Heat and Power (CHP) modules. The main element of a CHP module is the high-efficiency gas engine in which, as a result of the combustion process, converts energy contained in the fuel is into thermal and mechanical energy.
Mechanical energy, thanks to the synchronous generator coupled with the engine, is converted into electricity. The energy in the exhaust gas and the heat loss from the engine is recovered by heat exchanges and then made available. Through the heat distribution network, the heat may be distributed to various customers and used as heating energy for central heating or for production of domestic hot water. For instance, a central heating installation, in which a cogeneration unit has been used, to some extent, satisfies a part of the building’s demand for thermal energy while also producing electricity. Thanks to maximized use of primary energy from the gas fuel for simultaneous production of electricity and thermal energy as well as minimized losses, cogeneration systems achieve an efficiency of nearly 90 percent.

Functional principle of cogeneration in a CHP plant for using the primary energy in two ways:
an engine drives a generator, the waste heat is used as thermal heat.

Combined production of electricity and heat leads to a primary energy use that is better than it would be in separate production. Less fuel is used for the generation of the same quantities of electricity and heat than if they were produced separately. Combined energy production allows for more effective fuel usage and to reduce global carbon dioxide emissions, which improves the company’s overall image.  Inserting a cogeneration unit to an existing boiler room also means lower electricity operating costs (less electricity purchased, exemption from network charges and other taxes on electricity, reduction of the price risk etc.). A cogeneration unit may also serve as a backup source improving the safety of the power supply.

Thanks to their reliability coupled with low energy costs, the cogeneration systems grow on popularity. Not to mention, they noticeably reduce pollutant emissions in comparison with decentralized generation of heat.  In the next few years they will become one of the core energy technologies for the profitable production of heat and electricity for small and large facilities as well as in local electricity and heat distribution networks. One of such devices is the PowerBloc , designed for generation of both electricity and usable heat. It is a combination of a combustion engine, generator, heat exchanger assembly and a remote control system. PowerBloc cogeneration units fall into the category of decentralized energy sources. This means that power and heat are generated near the place of consumption thanks to which, a very high level of primary energy usage is achieved – up to 90 percent. In contrast, conventional, large power plants use only 30–50 percent of the primary energy in comparison to cogeneration units – the remaining energy is lost in the form of exhaust heat. In a PowerBloc cogeneration unit, the exhaust heat is used for heating purposes e.g. for heating of water, or as process heat at industrial plants. The produced electricity is used in the building or often can be transferred to the public network paid by the supplier. 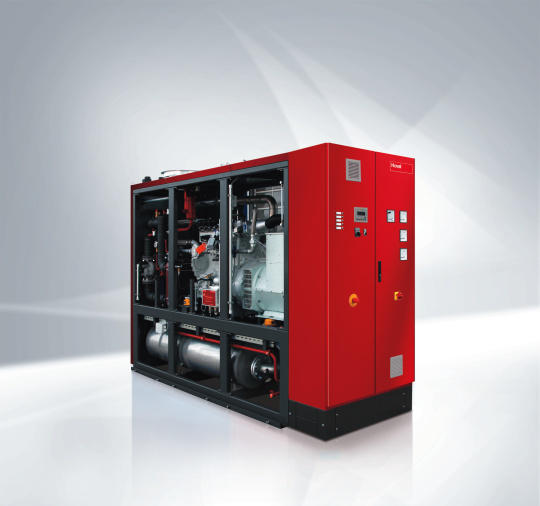 Due to the modular configuration of cogeneration system; availability of equipment, broad range of applications, ease of fuel supply and relatively high efficiency, gas cogeneration systems are the most efficient equipment for conversion of energy contained in primary fuel into electricity and heat. They allow savings of up to 30 percent of primary energy in comparison with separate production of heat and electricity. Cogeneration units are popular with singular facilities with relatively small power needs, especially in the industry, where the heat generated in the boiler room or supplied from the network and the electricity from the grid are replaced with the own combined production. Cogeneration units can then have a significant share in the supply of steam, hot water and hot air in the processing industry for technological purposes, heating and cooling as well as a large share in meeting the demand for electricity.

Profitability of an installation based on cogeneration units is conditioned on correct matching of the system to the facility so as to ensure maximum energy use. For this to be possible, it is necessary to correctly determine the thermal power of cogeneration units relative to the facility’s demand. In order to achieve maximum operational efficiency, Hoval develops scenarios with various models and prepares detailed return-on-investment calculations based on present framework conditions, which is especially important to potential investors. A properly designed cogeneration system leads to lower costs of final energy generation and contributes to reduced emissions, in particular of carbon dioxide.

Cookies help us deliver our services. By using our services, you agree to our use of cookies. END_OF_DOCUMENT_TOKEN_TO_BE_REPLACED