Pollution in the working area – what you need to know.

Pollution in the working area depends on the air flow concept as well as the type, arrangement and magnitude of the heat loads; beyond that, it depends on the type and arrangement of the air outlets. For example, pollution levels up to 100% with mixed ventilation can be reduced to below 10% using alternative air flow patterns. The bandwidth for heat load ranges from 100% to about 40%. The challenge for planning ventilation now involves taking advantage of this potential for improvement and savings. This calls for a precise examination of the procedures that lead to pollution in the working area of manufacturing halls.

The most effective way to make these procedures clear is by means of flow procedures that increase and reduce pollution levels. Figure 1 shows the typical flow and release procedures taking the example of the stratified air flow principle. 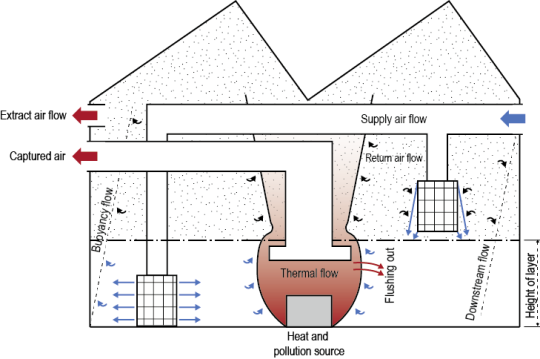 Figure 1: Flow procedures that increase and reduce pollution levels in a manufacturing hall

There are four flow areas in manufacturing halls. These are:

It is possible to derive the following effects of the flow procedures which have the effect of increasing and reducing pollution, with regard to their influence on the working area:

The distribution of released heat and pollution loads is subject to many different influences such as the air flow system, the manner in which heat and pollution are released as well as the capture devices. There are four evaluation parameters for describing the magnitude of their influences on pollution and heat loads. These are very useful for general considerations of the pollution procedures, because they make it possible to derive insights which are directly useful for planning hall ventilation and calculating the load. In particular, as will be shown in the next blog, they can be used for deriving the laws governing the load calculation. However, the technical procedures involved in measuring such influences are highly complicated in practical terms.

The complex procedures are described with four evaluation parameters, namely

The most efficient way of reducing pollutants and their spread throughout the hall is to capture them at the point where they are created. The effectiveness and efficiency of this measure is described by the degree of capture. This is defined as the ratio between the directly captured pollution flow and the released pollution flow, which is thus a measure of the effectiveness of the air handling measure. However, this is not a property of a capture device, but rather depends on many parameters such as the type of pollution release and on transverse and captured air flows. For instance, the same capture element can have different degrees of capture for different types of pollution.

The degree of pollution is a measure of the quality of the air flow concept. It represents a ratio between the effective proportion of a pollution flow in the working area and the proportion that is not captured directly and is released into the room. Released into the room means that a portion of the loads is channelled into the working area and another portion is channelled into the upper layer. In practice, determining a degree of pollution by technical measuring means is usually very difficult, because the quantity of the released pollution flow can often not be measured.

The degree of system pollution is the yardstick for quality when assessing the overall measures in air and ventilation technology. It represents a ratio between the pollution flow effective in the working area and the overall pollution flow that is released. The ratios for the degrees of capture and pollution and simple balance observations can be used for deriving clear equations for the degree of system pollution as a function of various air flow arrangements and pollution proportions. These lead to the area of load calculations.

The degree of flushing-out only relates to the stratified air flow, and is a measure of the magnitude of the interaction between transverse and thermal flows. It represents the ratio between the pollution and thermal loads flushed out of the thermal flow and the total pollution loads which are released. High values for the degree of flushing-out indicate a thermal flow which is almost completely disrupted, or else destroyed, whereas low values represent a thermal flow which is almost undisrupted and stable, such as occurs in the case of

-       Transverse flows which only act in the area of its envelope surface.

Thus it is shown that boundary conditions in the hall must also be considered for the purpose of using the stratified air flow principle. If it is not possible reliably to avoid transverse flows through openings to adjacent hall wings or entrances, apart from short-term opening and closing procedures, then stratified ventilation cannot be used.

The "occupational exposure limit" (OEL) value was introduced for substances in the air of a workplace which are harmful to health. This refers to the limit value of a time-weighted average concentration of hazardous substances at which no acute or chronic harmful effect on health is to be expected in general. The OEL values are summarised in TRGS 900 and have phased out the WEL values which applied up to 2004. If no OEL value has been listed for a pollutant in TRGS 900 yet, the WEL values stated in TRGS 402 which applied until 2004 can be used. The technical reference concentrations, TRC values, which were also valid until 2004, are no longer allowed to be used for the assessment because it is not possible to rule out a hazard to health even if the values are complied with. For the purpose of the assessment, the evaluation index I is calculated from the concentration of a pollutant cARB in the working area and the corresponding limit value LV as follows: I = cARB / LV.

Clean air recirculation refers to the situation when captured air containing pollution is taken from the working area, cleaned in a separator and then completely or partially supplied back to the work area. It can be used for two reasons:

With clean air recirculation, it should be noted that the residual content of non-air substances must be limited to such an extent that the concentration in the working area is not increased to any significant extent compared to operation purely with outside air.

The general dust limit value was defined in 2014 for the alveolar fraction (fine dust) at a limit value of 1.25 mg/m³. For non-carcinogenic dust which is below the general substance limit value, this means a maximum recirculated air concentration of 0.25 mg/m³ must be complied with according to Table 1, row 1. This applies irrespective of the values in Table 1.

The term clean air recirculation is somewhat misleading as the air that is resupplied is in not "clean" in the conventional sense of the word, but contains the pollutants in a very low concentration. As a result, without additional air-conditioning measures, it is only a matter of time until the returned clean air builds the concentration of pollutants in the working area back up to the levels that were present before it was collected. In order to avoid this, depending on the type of pollutant and quantity of the returned clean air flow in question, not only stipulates the minimum outside air proportion required according to Table 2, but also the need for additional room ventilation.

Table 2: Outside air proportion in relation to the supply air flow with clean air recirculation

Go to the overview of our ventilation systems

Cookies help us deliver our services. By using our services, you agree to our use of cookies. END_OF_DOCUMENT_TOKEN_TO_BE_REPLACED