◄ Back to all articles
When it comes to designing ventilation and air-conditioning systems for logistics halls, the basic principles of flow mechanics always apply – regardless of the specific requirements for the hall temperature. These principles impact upon the planning and installation of the ventilation technology, which means that they in turn also affect the (operating) costs.

For example, a vertical temperature gradient should be aimed for to keep heat loss to a minimum by keeping temperature rises as low as possible, especially in the upper hall area. One way of making this possible is to maintain maximum air circulation down the aisles. The flow conditions will be optimised, for example, by using gridded shelving systems that are permeable and have a generous gap between them and the floor.

The specific flow properties of torsion air distributors – including the patented Air-Injector from Hoval – ensure that the air inside logistics halls is distributed exactly as required. 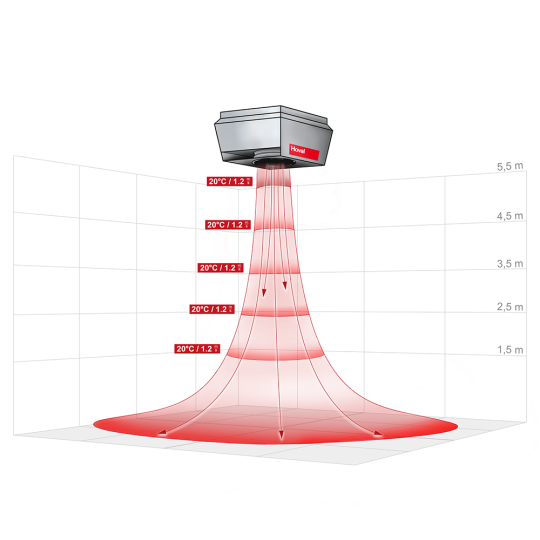 In heating mode, a highly concentrated air stream is emitted at high speed from the distributor and a negative pressure difference occurs around the air column (Bernoulli distribution). As a result, the ambient air moves from the ceiling area and, to a lesser extent, from the top shelves towards the air stream. As the depth of penetration increases, the air stream slows down, the surrounding negative pressure decreases and the ambient air is induced. The flow then reaches the bottom shelves.

In order for the flow to pass efficiently to the next shelves, a space of 0.2 to 0.3 metres (m) should be left between the floor and the shelving. The improved air distribution makes it possible to optimise the flow of up to three aisles with a series of air passages. (Refer to Fig. 1: Air flow through aisles.)

Rows of shelves restrict the rotationally symmetrical flow of torsion air distributors. The fronts of the rows of shelves act as walls as far as air flow is concerned, causing wall jets to form (Coanda Effect). These have a wider reach than open jets (Regenscheit’s Formulation) and a greater mounting height than is the case with free flow distribution. The extent can stretch as far as 1.5 m. 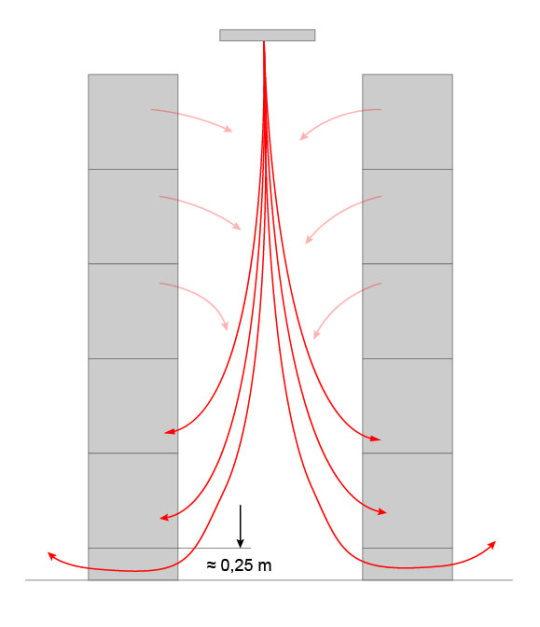 Fig. 1: Air flow through aisles: The air being supplied vertically from above allows low temperature gradients to be achieved across the whole height. In a hall that is between eight and twenty metres tall, the values will typically sit somewhere between 0.15 Kelvin and 0.25 Kelvin.
If the goods being stored don’t have any specific temperature requirements, the ideal room temperature is generally between a frost-free temperature and 16 degrees Celsius. A temperature of around 8 degrees Celsius can be considered to be “frost-free” (when using water-controlled, glycol-free systems and a switching temperature of 5 degrees Celsius on the frost stat).

The individual ventilation units are then operated with the heat output resulting from the maximum possible temperature difference with the fixed mounting height and volumetric current. An on-off control system is all that it takes to maintain a frost-free room temperature and only a few units need to be installed.
...which apply, for instance, when storing food or pharmaceutical products, are usually under 25 degrees Celsius. In the case of direct application on the top shelves, the supply air temperature in heating mode may not exceed the upper temperature limit. This only allows for a very small temperature range and in turn a low heat output, meaning that a relatively large number of ventilation units will need to be installed if the temperature is to be maintained.

This is where torsion air distributors come in, as they boost the temperature range and heat output. In heating mode, the air flow is highly concentrated and there is no need to apply supply air directly to the top shelves. Consequently, the supply air can be blown in at a temperature of around three Kelvin (K) higher than the upper temperature limit. The heat output required can then be achieved with fewer units, which cuts back on the initial investment and ongoing operating costs. Not to mention that it’s good news for the environment too.

During the summer months, the set temperature limits can be followed using recirculated or outdoor air units. Air from the outside can be used for direct and/or indirect cooling. Automated system control comes highly recommended in order to follow those temperature limits to the letter.

If diesel forklifts are used in a hall, country specific technical Rules on Hazardous Substances, Diesel Engine Emissions are binding. It can be possible that the supply air flow needs to be adjusted accordingly to ensure that the maximum limits for the concentration of pollutants are complied with.

Modern electric forklifts are powered by lithium-ion batteries. No hydrogen is released when they are being charged, which puts them at an advantage over standard lead-acid batteries. This also means that their charging stations don’t need to comply with the ATEX Directive for explosion protection and prevention and no further ventilation measures need to be taken.

If shelf conveying systems are in use, the heat released by the systems needs to be taken into account when calculating the cooling load.

Cookies help us deliver our services. By using our services, you agree to our use of cookies. END_OF_DOCUMENT_TOKEN_TO_BE_REPLACED