This is a place where sporting and music history are written. 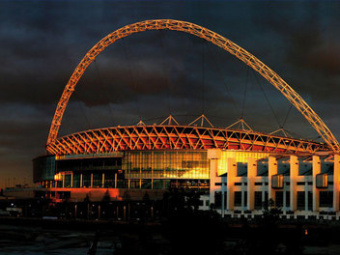 A new chapter in the history of Wembley Stadium itself was written in spring 2007, with the opening of the new stadium. The new building features an arch spanning the north half of the stadium at a height of 133 metres. It is more than four times as high as the former twin towers of Wembley – and so big that you could roll the famous "London Eye“ under it. The arch supports the roof construction, the weight of which would otherwise have to be borne by pillars. And as there are no pillars in the new stadium, all 90‘000 spectators have an unobstructed view of the pitch – and of the two huge electronic screens, each the size of 600 domestic television sets.

Brazilian footballer Pelé, one of the best players in history, once described Wembley Stadium as the cathedral, the capital and the heart of football. And the heart of Wembley Stadium itself throbs with a quintuple beat: There is a Hoval UltraGas® SR 4000 condensing boiler at each corner of the stadium, and a fifth is installed in one of the equipment rooms. With an output of between 4100 and 4300 kW, they heat the entire building complex – and the pitch, to ensure that it is always playable. Thus, Hoval also plays its role in ensuring that spectators can still witness sporting history being made.

Cookies help us deliver our services. By using our services, you agree to our use of cookies. END_OF_DOCUMENT_TOKEN_TO_BE_REPLACED